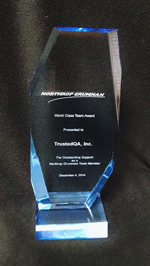 For the second year in a row TrustedQA was recently honored by Northrop Grumman Information Systems (NGIS) as a top performing supplier for their outstanding performance and support which significantly benefits Northrop Grumman and its government and commercial customers.

Northrop Grumman presented the 2014 World Class Team Supplier Award to TrustedQA at the Waterford at Springfield located in Springfield, VA on December 4, 2014. The purpose of this award is to recognize those suppliers’ whose hard work and dedication have resulted in significant contributions to the overall company goals. Criteria for the award included delivery performance, outstanding program support, superior technical achievement and reported cost performance/competitiveness.

“Receiving this award one again from Northrop Grumman is such an honor. It has been a pleasure teaming with such a world class company and this award demonstrates our mutual commitment for success. This award will be proudly displayed front and center as we continue to provide Northrop Grumman with our highest level of service and support” said Neil Moyer, Executive Vice President of TrustedQA, Inc.

TrustedQA, Inc. has provided Quality/Information Assurance, Software/Systems Testing, and Configuration/Release Management services to both commercial and government clients since 1988.